Prescription Dysport is an injection used to temporarily improve the look of moderate to severe frown lines between the eyebrows (glabellar lines) in adults less than 65 years of age. Dysport is a purified formulation that has been shown to deliver temporary improvements in moderate to severe frown lines, even with repeat treatments. So, the effect of repeat treatment with Dysport may be comparable to your first use.* *In clinical trials, the efficacy of Dysport was studied in a total of 376 patients and was demonstrated with up to 4 repeated treatments. The safety of Dysport has been studied in up to 12 repeated treatments.

Dysport Before and After 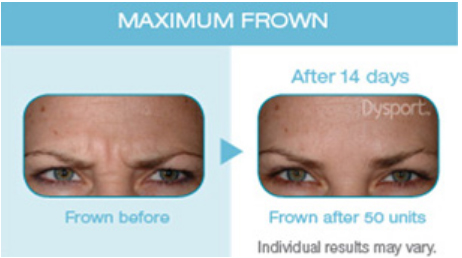 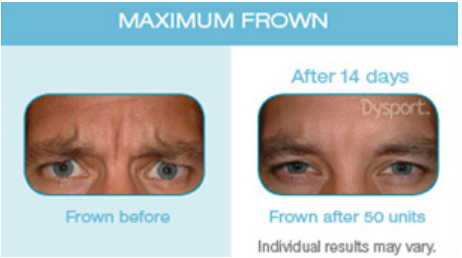 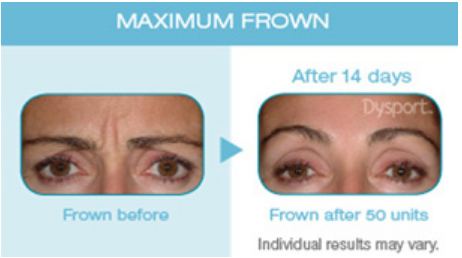 Prescription Dysport is an injection used to temporarily improve the look of moderate to severe frown lines between the eyebrows (glabellar lines) in adults less than 65 years of age.

How does Dysport works?

With just 1 injection into each of 5 points between and over the eyebrows, Dysport stops the signal from the nerve to the muscles, ultimately resulting in a reduction of muscle activity and temporarily preventing contraction of the muscles that cause frown lines.

What is the most important information I should know about Dysport?

Dysport may cause serious side effects that can be life threatening. Call your doctor or get medical help right away if you have any of these problems after treatment with Dysport:

Problems swallowing, speaking, or breathing. These problems can happen hours to weeks after an injection of Dysport usually because the muscles that you use to breathe and swallow can become weak after the injection. Death can happen as a complication if you have severe problems with swallowing or breathing after treatment with Dysport.People with certain breathing problems may need to use muscles in their neck to help them breathe. These patients may be at greater risk for serious breathing problems with Dysport.

Swallowing problems may last for several weeks. People who can not swallow well may need a feeding tube to receive food and water. If swallowing problems are severe, food or liquids may go into your lungs. People who already have swallowing or breathing problems before receiving Dysport have the highest risk of getting these problems.Spread of toxin effects. In some cases, the effect of botulinum toxin may affect areas of the body away from the injection site and cause symptoms of a serious condition called botulism. The symptoms of botulism include: loss of strength and muscle weakness all over the bodydouble visionblurred vision and drooping eyelidshoarseness or change or loss of voice (dysphonia) trouble saying words clearly (dysarthria) loss of bladder controltrouble breathingtrouble swallowing.

These symptoms can happen hours to weeks after you receive an injection of Dysport.
These problems could make it unsafe for you to drive a car or do other dangerous activities.

Are there any reasons I should not be treated with Dysport?

Do not have Dysport treatment if you: are allergic to Dysport or any of its ingredients (see the end of the Medication Guide for a list of ingredients), are allergic to cow’s milk protein, had an allergic reaction to any other botulinum toxin product (such as Myobloc® or Botox®), or have a skin infection at the planned injection site. Dysport should not be used in children or in women who are pregnant or breastfeeding.

Dysport may not be right for you if: you have surgical changes to your face, very weak muscles in the treatment area, your face looks very different from side to side, the injection site is inflamed, you have droopy eyelids or sagging eyelid folds, deep facial scars, thick oily skin, or if your wrinkles can’t be smoothed by spreading them apart.

How often can I get injections of Dysport?

What should I tell my doctor before getting Dysport?

Tell your doctor about all your medical conditions, including if you have: a disease that affects your muscles and nerves (such as amyotrophic lateral sclerosis [ALS or Lou Gehrig’s disease], myasthenia gravis, or Lambert-Eaton syndrome), allergies to any botulinum toxin product, had any side effect from any botulinum toxin product in the past, a breathing problem (such as asthma or emphysema), swallowing problems, bleeding problems, diabetes, a slow heart beat or other problem with your heart rate or rhythm, plans to have surgery, had surgery on your face, weakness of your forehead muscles (such as trouble raising your eyebrows), drooping eyelids, or any other change in the way your face normally looks.

Especially tell your doctor if you: have received any other botulinum toxin product in the last four months, have received injections of botulinum toxin, such as Myobloc® (rimabotulinumtoxinB) or Botox® (onabotulinumtoxinA) in the past (be sure your doctor knows exactly which product you received), have recently received an antibiotic by injection, take muscle relaxants, take an allergy or cold medicine, or take a sleep medicine.

How long has Dysport been used?

What about side effects of Dysport?

The most common side effects are nose and throat irritation, headache, injection site pain, injection site skin reaction, upper respiratory tract infection, eyelid swelling, eyelid drooping, sinus inflammation, and nausea. In some cases, Dysport may cause serious side effects, such as swallowing or breathing problems, that may be life threatening.

What should I avoid while taking Dysport?

Dysport may cause loss of strength or general muscle weakness, blurred vision, or drooping eyelids within hours to weeks of taking Dysport. If this happens, do not drive a car, operate machinery, or do other dangerous activities.

The process and treatment was painless, quick and effective. My hats off to Dr. Ghasri

Amazing! i had my first appt this past weekend and Dr. Ghasri was extremely professional, friendly and thorough.

I highly recommend him to anyone looking for a caring Dr who knows his stuff!

Dr. Ghasri is really as good as it gets. If there were a 10-star option, I’d pick that.